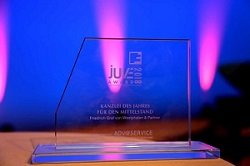 At a ceremony in Frankfurt’s Alte Oper in, the German specialized publishing house JUVE awarded the title of “Law Firm of the Year for the Mittelstand” to FgvW. JUVE justified the award with FGvW outstanding positioning in the upper „Mittelstand“ market, for which the German economy is famous, and which epitomises the IBLC.

"Even more international and more closely networked, this is how the firm presents itself to its discerning Mittelstand clientele," said the JUVE editorial staff in its laudatory statement. "Moreover, the in-depth specialisation in sectors such as healthcare has already led to top-class mandates. “https://awards.juve.de/sieger/kanzlei-des-jahres-fuer-den-mittelstand/

FGvW lead partner Barbara Mayer said, “We are very pleased about this award, which is based on the intensive survey of in-house lawyers in Germany and abroad as well as of lawyers from other law firms. This is an incentive and motivation for all of us: from interns and legal trainees to assistants and associates to partners!”

Mayer stressed that FGvW philosophy is tailored to Mittelstand companies and that its clients seek consultants they can see eye-to-eye with who have an entrepreneurial spirit and think quickly and in a solution-oriented manner, are easy to reach and convince both professionally and through commitment and creativity. She continued, “This is also where our appeal for qualified junior lawyers comes from. We attract young lawyers through our versatile business    in Germany and from here all over the world, combined with flat hierarchies, a real partner perspective and a comparatively good work-life balance.”

Mayer also thanked the IBLC Members, since FGvW’s international orientation and its worldwide network were highlighted in the laudation. Congratulations to Barbara, Gerhard, Sven, and Hendrik and the whole team at Friedrich Graf von Westphalen & Partner.